A Land Rover for all people 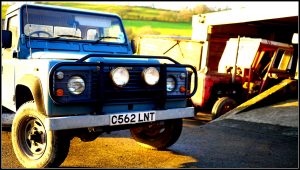 Today I sat in a very smart Land Rover Discovery, the one with the bells and whistles, the V8 with the heated leather seats (only mock if you live in the Welsh Hills). The neighbour was looking to down size his fleet of Jaguars and Land Rovers and I was attracted by the seven seats and the LPG gas conversion.

Seven seats would be a luxury compared to the two and a half that I have at the moment and as the kids manage their five a day they are beginning to outgrow the van (which is used as my daily run around as well as delivering logs in). We struggle to get the kids in that or the Land Rover; certainly no room for mum.

Thing is we already have four vehicles (including tractor) which are all taxed and insured, do we really need a fourth? Can we afford a fourth? Reality is no. The obvious choice is to sell the Land Rover 110 pick up as it is no longer fit for purpose as it has now second row of seats.

My great friend and neighbour sold me the Land Rover; it was his third car, bought it from new in 1986 and travelled only 40,000 miles over the next 20 years, mainly to the dealership for servicing. He sold me the vehicle and was then furious when I added driving lights to the front. Later I recalled at his funeral that he referred to this adulteration as ‘penis extensions.’

After much reflection I told him that I couldn’t really afford to keep the 110 and run the Discovery. Whilst I am very fond of the 110 and its heritage, I need to focus on what our family needs are now, rather than some sentiment from the past. The neighbor responded by saying that he would be glad to swap his Discovery for my 110 as they had many photographs of their new place that included my 110 that lived there for most of its life and would in spirit be coming home. Do I swap the 110 for the V8 Discovery 2?