What’s In a Bottle of Wine? 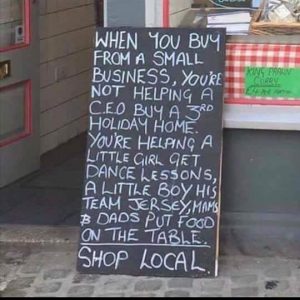 I set off bright and early in the van to load and go from the yard. It was icier than I had thought and took the cautious decision to return the van to TVF HQ and proceed in the Land Rover for the two local deliveries I had booked in for this morning. There was a steep icy mile ahead and a flat quarter mile behind. Problem was that I could not get my rear wheel drive van back up our lane due to the ice. Right on cue my neighbour shows up with his Land Rover and in less than five minutes I was setting off in mine having been towed back in.

Deliveries were made and I dropped a bottle of wine off at the neighbours as a small token of my appreciation for his help. He didn’t want to accept it until I told him that it had been given to me by another neighbour after I had helped him get his vehicle out using my tracked snow blower, enabling him to collect his insulin from the chemist.

It reminded me of an exercise that Shropshire County Council Economic Development Department told me about in Minsterley where they introduced a number of marked five-pound notes into the community. The idea was that you registered each time the note changed hands. It showed that on average the note changed hands six times before it left the area, making each note worth £30 to the local community.

Perhaps every community needs a bottle of wine that is transferred upon delivery of a good deed. In that way we get the pleasure of the wine when we give it away rather than drinking it ourselves. Money spent in the local community is very similar, we can take pleasure from the fact that it gets passed around and pays for Brownie sessions, haircuts, rugby coaching and maybe even a bottle of wine occasionally.