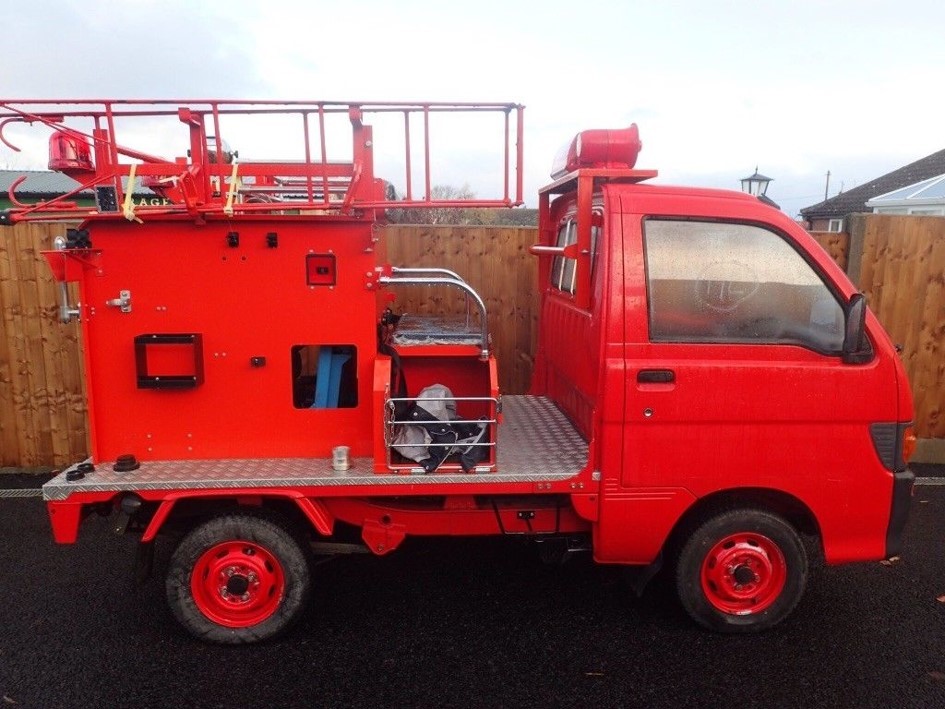 eBay is a great source of inspiration, market place for recycling stuff that you no longer need or actually making purchases. The Chief Wood Cutters Wife and I share an eBay account that we have had for over ten years and accumulated 1400 feedback points trading as 4acregarden.

This four wheel drive fire engine caught my eye after another fire destroyed a neighbour’s property, the second in the last five years. The first one spooked me as it was the destruction of a newly renovated house, in fact the fire started during the celebration to mark the completion of the renovation.

With both fires, the remoteness of our location added to the difficulties that the fire brigade faced regarding locating, access and then carrying water to the scene. We had our insures in to check that we had enough cover, had the fire brigade out to check out location, nearest water source and survey our alarm system that already included heat alarms, smoke alarms, carbon monoxide alarms as well as emergency lighting in the event.

Just before Christmas there were three emergency vehicles at one of the neighbours, as the name suggests, the first one there was a first responder, the sort of person that you would want on your doorstep at the time of a medical emergency, someone who lives in the area and knows the area. They then hand over to the paramedics and if required a ‘quick trip’ to the emergency room.

Seeing the little red fire engine got me thinking: why doesn’t the community own this little truck and have it on constant stand by to be the first responder in case of a fire emergency? I have often, half jokingly suggested that TVF HQ would burn to the ground before the fire brigade arrives. Call me old fashioned, but that’s not what I would have wanted after spending a life time building upto what we have here at Tyn-y-Waen, not to mention the near two decades of spending most of the fruits of our labour developing the place from the run down cottage that it was for many years prior to our occupation. Often the first ten minutes can be critical in a house fire and if you can arrive with your fire engine in five minutes rather than 15 minutes (sooner than the fastest time I have ever driven into Oswestry), then there is more of a chance of your home being saved.

So how could it work, the community owning it’s own fire engine? Well, the fire engine is £5000, having 2000 miles on the clock.

This is the link to the listing

It is based on a popular vehicle with readily available parts, so assume that it only travels once a year to the MOT station, it’s upkeep would not be much. It is likely to be fully depreciated, so if you sold it you are likely to get your money back, assuming everything else is equal. My first thoughts were that you would need to have a system of first responders, trained and on standby for a shout. We receive training from the fire brigade and acquire as much knowledge, redundant equipment and guidance, having a telephone message system to the first on call, second and third as required. Where would you keep it the Wood Cutters Wife asked? At the yard I suppose I responded idlily, then it struck me that the fire engine could be left in the yard and who ever needed it could take advantage of it, drawing in assistance from others having first called the fire brigade. So who would pay for it? Would it be me and then sell keys to any neighbours who saw the advantage of a fire engine parked within five minutes of your burning home. But what if you hadn’t joined the club? Would we watch as your house burnt? No, don’t be ridiculous, we would all do everything in our power to assist you in your time of need, you may of course which to make a contribution to the cost of the machine if you had derived benefit from it.

So run those numbers by me again….. vehicle costs £5000 and say a nominal £200 per year running costs. The question is how many people do you divide this by? Fag packet calculations suggests that there are 200 rural homes around TVF HQ within a five-minute drive from our yard. So, if half of those folk were prepared to make a one off commitment for £50 and £4 per year, we have a community fire engine. Just a thought. How much is your house worth to you? I am happy to be the first one to commit to the £50 and am happy to store and maintain the vehicle, who else is in?